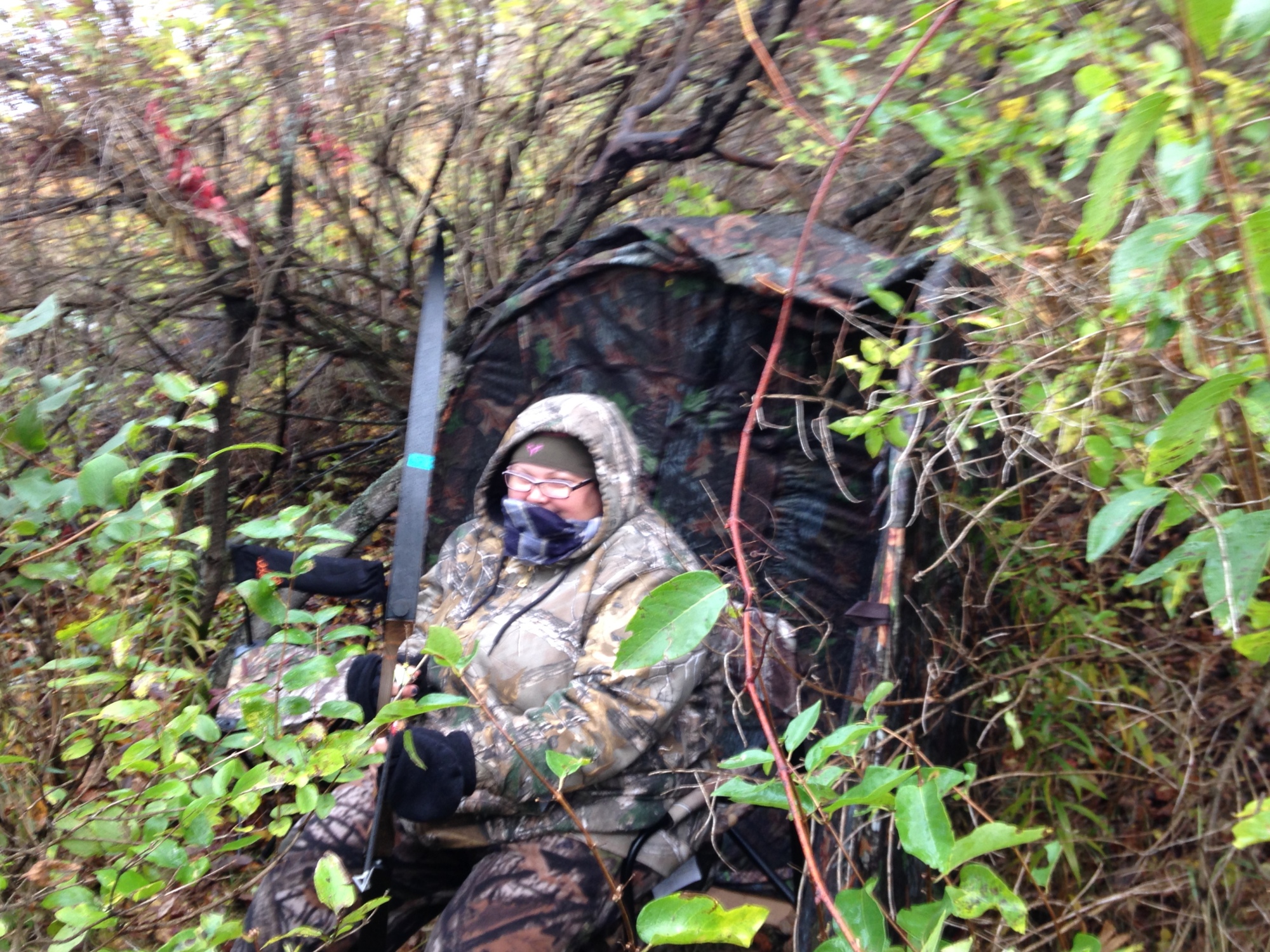 :: in which we learn to be okay with failure ::

I am a huntress.  No, I haven’t actually shot anything.  But I am a hunter nonetheless.  No, really.  See, what I do is this: I put on camouflage clothing, and I wear a face mask, and I sit very quietly, for a really long time.  And I look around, but without moving my head.  And I stifle coughs, and I adjust my gloves in super slow motion so I don’t make any sounds or noticeable movements.  And I sit.  And sit.  For hours.  And I shiver in the cold.  And I wonder what time it is but I don’t check my phone because that would be too much movement.  And when it’s time to stop, I go inside and put my bow away.  And that’s hunting.  Isn’t it?

My first hunting trip was during deer season.  I was excited, and I sincerely thought I would come home with a deer that first day.  Because where I live, deer are like trees.  They’re just everywhere.  You admire their beauty, but you don’t get too excited because you see them every day.  And you definitely try not to hit one with your car.  Although after an unsuccessful hunting season, I realized that hitting one with my car would be a good way to get a deer because that way I could hunt out of season.  JOKING, anyone who works for the DNR!!  J-O-K-I-N-G.  I would never think that.

Anyway, two of my very nice brothers-in-law took me out to hunt for the first time.  It was a great experience, and I loved it.  Except we didn’t shoot any deer.  We didn’t even SEE a deer.  Hold on, I should have phrased that differently.  We didn’t even see A deer.  Not a one.  But the trip was fun anyway.  My hands were sore from holding my bow at the ready for hours, my fingers and toes were numb from the cold, and my eyes were strained from looking intensely through the brush for any animal movement.  I felt like a real hunter.

I hunted deer a few more times during that season, and still saw no deer.  For those of you keeping score at home, that number again was…ZERO.  But I figured that going out and seeing nothing was par for the course, just part of the game.  That’s why they call it hunting and not grocery shopping, ha ha ha.  Hunter jokes.  See, I was bona fide already.

Then it was winter, and I set my sights on rabbits.  I don’t want to go into too much detail on how I tried to catch a rabbit because I’m not 100% certain it was legal.  But don’t worry, I caught zero rabbits.  Although every morning I would go outside and see plentiful rabbit tracks all around my traps, but nothing IN the traps.  After about a week of trying, the rabbits actually started laying down tracks right near my front door.  They were mocking me with their big dumb footprints.

In between seasons, I worked on squirrel hunting.  But that is another post for another time.  I haven’t yet recovered from the emotional trauma enough to be able to write about it.  Excuse me while I breathe into a paper bag for a moment.

Then spring came along and it was time for turkey season.  Turkeys are the reason I got my hunting license in the first place.  I was so anxious to get a turkey.  I learned from deer season that you need to do some research and prep work before you go hunting, so I watched the turkey activity in my neighborhood.  I had plans.  My brother-in-law and I bought turkey calls and practiced with them before the season opened.  I even purchased a rubber turkey decoy called “Working Girl,” which is kind of gross but I did what I had to do.  Anyway, I bet you can guess how many turkeys we shot.  That’s right, class: zero.  We didn’t even see A turkey.  We did see a family of deer with a frolicky blonde baby, and that was pretty neat.  They could smell us but couldn’t see us, so even though they were nervous they stuck around for a while and let us watch them doing their normal deer things.  On another turkey hunting trip, I saw a frog.  A little one.  So it wasn’t a total waste of time.

I wouldn’t mind sitting outside for hours doing nothing other than listening to the birds sing if it weren’t for the cold.  Hunting seasons seems to be timed for the coldest parts of the year, and the coldest parts of the day.  You have to get up early in the morning, before the earth’s heater is turned on.  Or you have to go out in the evening when the wind is kicking up.  And you can’t really relax and enjoy the scenery because you’re just thinking about how cold you are and how you wish you were wearing one more layer of long johns.  And then you fixate on the lack of animals you have seen on these trips and you get depressed.  By my last turkey hunting trip, I had gotten pretty discouraged so I wasn’t even trying to be quiet.  I would adjust my glasses any time I felt like it, without worrying about the movement.  In fact, I wasn’t even wearing glasses on the first several trips because I heard that turkeys have such good eyesight they will see the reflection from your glasses and know you’re there.

Back when I still imagined there might be deer or turkeys about, I wouldn’t even dare to whisper to my hunting partner; we communicated in barely visible hand gestures that, come to think of it, we probably should have practiced ahead of time.  But by this trip, I really didn’t care.  I would walk over to my brother-in-law and say in a loud voice, “I’m going to the house to get some water, you want anything?”  I wore my glasses because I wasn’t going to give myself a headache for some imaginary turkey.  Instead of my fingerless camo gloves, I wore my white gloves because they are soft and comfy.  Here’s a zen riddle for you: If a hunter wears white and there’s no turkey there to see it, does it still break your camouflage?

I’ll leave you with one final thought.  I read in a David Sedaris book that in Michigan, it’s legal for blind people to hunt, without anyone accompanying them.  I think that’s great.  I’m all for liberty; why drag society down with a bunch of unnecessary rules?  If a blind person wants to hunt, let him hunt!  I’m sure he would know if he is capable of going out there with a gun and he would probably stay inside if he didn’t.  I guess he would have to hunt by sound rather than sight.  Hang on a second.  In hunter safety they always say Don’t Shoot At Sounds.  And you know who else is out there making sounds?  ME.  Let me think this through…so I would be out there, and there would be a blind person wielding a shotgun with no one there to point out my safety orange.  Holy crap!  Why is this allowed?   This is another good reason to stick to bow season.  That way, if a blind person is close enough to shoot you with an arrow, you will see them and you can call out, “Hey!  I’m not a deer!”  Unless the blind hunter is also deaf.  In which case, you may need to set aside your hunting goals for the morning and just keep your eye on what that guy’s doing.

2 thoughts on “A Lesson in Hunting”