One year later, I am delivering on my promise to write about silk processing . . . boy, do I know how to test your patience or what? If you missed the first two installments of this series, check them out here and here.

So let me catch you up. Silkworms came, silkworms spun, and now we have to do something with all this silk. The cocoons spun by the caterpillars are made of silk, but how are you going to use it in this form?

First we need to stop the silkmoths from fully developing and hatching out of the cocoons.* To do this, I simply bake the cocoons in the oven for about 20 minutes. Then I use an exacto knife to slice open the cocoons and remove the pupae from inside. (You can do this later, but I’ve found it is easier and less messy to take them out now.)

Now that we have the comfort of knowing nothing live will be wriggling out of the cocoons, we can move on. The cocoons are held together with a protein called sericin. This makes the cocoon hard and gives the pupa inside some protection from predators. (Silkworms don’t know they are extinct in the wild and don’t have predators anymore. Although, come to think of it, I guess I am a predator but let’s not talk about that because it’s really affecting my self-esteem.) Removing the sericin from the cocoon is called degumming, and it’s accomplished by simmering the silk in soapy water. Specifically, I use the recipe from a great blog called wormspit, which calls for water, washing soda, and Orvus paste. It works like a charm! 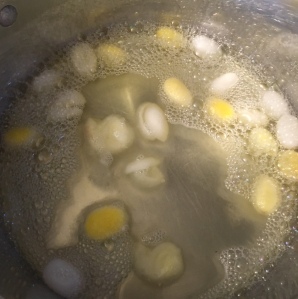 Once the cocoons are degummed, it’s time to stretch them out into a nice square shape. This is called a mawata, or silk hankie. It’s not the kind of hankie you would use to blow your nose, unless you have an astronomical handkerchief budget.

There’s an art to stretching cocoons, and it took me a while to get the hang of it. Even now, I’m sure I’ve left a lot of room for improvement. Each cocoon is very thin, as you can see from the pictures above. So I stretch about 30 cocoons on the frame, one by one, until it is thicker . . . like this:

The next step is to rinse all the soap out of the hankie, then carefully remove it from the frame. Silk catches on everything, so this part of the process can be tricky.

I let the hankie sit on a towel overnight to dry, and then it’s pretty much ready to use (or sell, as the case may be). These can be dyed or used in their natural white state. If you’re wondering who buys this stuff, crafters who knit or crochet will buy hankies to spin their own silk yarn. Many people mix the silk with wool to create a blended yarn. The silk adds extra shine to the wool yarn. You can also knit or crochet straight from the hankie, without spinning it into yarn first. For obvious financial reasons, I recommend that everyone try it!

This is only one way of processing silk. There are two other methods (that I know of), that I will just briefly describe for you. Instead of stretching the cocoons out, you can unravel them in a process called reeling. The caterpillar spins the cocoon out of one single strand of silk, which is extremely long when completely stretched out (up to one mile). I reeled a batch of silk several years ago, and it was a pain in the bootie. You have to build the required reel, because it’s not something you can pick up at a craft store. Sometimes you see antique zakuris from Japan for sale on ebay, but these are usually broken. And then there’s the difficulty of hooking 30-40 nearly invisible strands of silk to the reel . . . I can’t go into it here because I’m having a panic attack just thinking about it. Let’s just say it’s really hard and leave it at that.

The second alternative method of silk processing involves the loose, gauzy outer mantle of silk the caterpillar spins before starting the actual cocoon. I peel this off before I bake the cocoons, and pile them up like sheep’s fleece (below).

This gauzy silk can be carded just like fleece, until it’s brushed into soft, shiny fibers. It can then be drafted and spun into yarn the same way you would treat wool.

*You may be wondering why we have to kill the pupae/moths before they come out of the cocoon. If you are reeling the silk (as explained above), you can’t allow the moth to break the single silk thread by working its way out of the cocoon. If you’re making silk hankies, it doesn’t matter if the thread is broken, but do you really need hundreds of moths occupying your dining room table? I don’t. Plus, the moths often stain the cocoons when they come out, which I’ve found most customers frown on.

One thought on “Silk, Part III”